While this quarter's earnings reports have crossed a substantially lowered profit bar, future expectations through the year indicate a recession could be on the way.

Estimates for the third and fourth quarters have been dropped to levels not seen since the days of the 2008 financial crisis, below even the muted 2 percent expected level of inflation.

That's an ominous recession sign for an economy that has barely managed to attain positive growth this year even with the strong level of earnings beats, according to an analysis by Nicholas Colas, chief market strategist at ConvergEx in New York.

"Revenue estimates for the back half of 2012 have been slowly working their way lower this year," Colas said. "This trend, however, has accelerated to the downside over the past 30 days and we are fast approaching levels where these estimates are unambiguously pointing to the risk of a U.S./global recession later into 2012 and 2013."

] have beaten analyst profit estimates. Only 42 percent, though, have beaten on top-line revenue estimates, indicating that growth is weakening.

That's evidenced by a rash of downward forward revisions from analysts.

In the broader S&P 1500, analysts have cut outlooks for 792 companies and raised for just 323, with the decreases especially prevalent in technology, which saw half its components down, the highest level since February 2009, according to Bespoke Investment Group.

In Colas' analysis, though, he limited his look to the companies in the Dow Jones Industrial Average  [.DJIA  12822.57

Analysts now expect revenue to grow at just 1 percent to 1.5 percent pace in the third quarter. The forecast for the fourth quarter is 3.9 percent, though Colas says "I doubt any analyst could defend this point of view unless they expect a rapidly weakening dollar...or a truly epic round of liquidity-pumping operations from the world's central banks."

Colas is not alone in his expectations for recession.

Laksman Achuthan, at the Economic Cycle Research Institute, made headlines late last year when he said he expected recession to hit the U.S. in the first quarter, which, according to the most current data, didn't happen.

But he recently said in media appearances that he is sticking to the call, saying the country already could be in recession or is progressing toward one later this year.

"There have been a lot of economists and analysts who have had their blinders on for quite some time," said Brian LaRose, an analyst at United-ICAP in Jersey City, N.J. "We're not bullish on the recovery here in the U.S. We think that there are far greater problems ahead that have yet to be addressed."

Colas also is not alone in his surprise that stock prices have continued to trend higher despite the bleak economic prospects.

The only reason he, and other strategists, have devised for the climb in equities has been hope for more Federal Reserve intervention. The Fed has carried out two asset buying programs called quantitative easing, as well as a third program that entailed buying and selling debt in equal amounts known as Operation Twist, which it voted to extend last month. 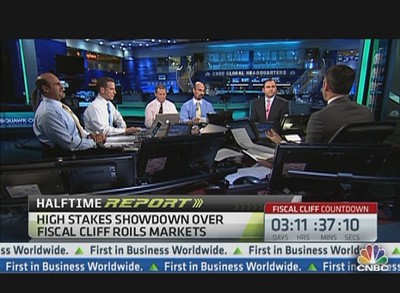 LaRose, though, thinks investors "want a QE3 so badly, they refuse to accept the fact that there will be no QE3."

The rise in stock prices that has accompanied those easing hopes in fact, may be what actually thwarts another round. Fed Chairman Ben Bernanke favors the stock market as a gauge of economic health and the vehicle for a wealth effect that boosts sentiment.

"If the economy was plummeting into a recession then it would be obvious that monetary policy needed to be eased," said Paul Dales, chief U.S. economist at Capital Economics. "But, even allowing for the deterioration in the incoming data, the economy is still growing modestly, stock markets have not tanked and the euro-zone crisis is still rumbling along without ever really developing into a full-scale meltdown."

Should the economic data continue to deteriorate and earnings through the rest of 2012 come in as low as Colas expects, the case will become clearer for a a recession and, perhaps, more Fed intervention.

Bank of America Merrill Lynch has been below consensus economic forecasts, looking for just 1.1 percent growth this quarter, and said Friday that if anything it could be too optimistic.

"The European crisis shows no sign of fading and, in the usual lagged fashion, should have increasing rather than decreasing collateral impacts on growth outside Europe," Ethan S. Harris, BofA's North American economist, said in a note.

"Last but not least, the risks of the fiscal cliff have just started to work their way into corporate psychology," he added. "We are frankly a bit puzzled by the persistent optimism in consensus and official forecasts."